As the school year draws to a close, we’re going to have lots of opportunities to celebrate our children’s successes. Whether it’s sports awards, music awards, academic awards, or even just attendance awards, there’s no limit to the amount of accolades our children can receive.

Those honors and the recognition they bring are well deserved and we should celebrate wholeheartedly!

However, when’s the last time you celebrated a child’s character achievements? Just like excelling in their favorite sport or on their chosen musical instrument is praiseworthy, so is the morally beautiful character they demonstrate in your home and with your family. Although our children may receive “Good Sportsmanship” or “Most Diligent” awards in their schools, when they know that their parents recognize and appreciate their good character at home, (where no one is waiting to applaud their efforts) they will be encouraged to show even more Christ-like, courageous character.

Think of an appropriate way to show your kids that you’re proud of their character choices. When our children were all very young, I used a simple hat made out of a paper plate and construction paper strips. (The staples poking into the kid’s heads was NOT their favorite part of being rewarded☺) On the paper plate, I simply wrote “YOU DID GREAT!”

When I observed one of the children exhibiting good character, I would place the hat on their head when we were all gathered around the dinner table. I would ask the child if they knew why they were receiving the “YOU DID GREAT” hat. Often, they had no idea! However, as I shared with the rest of the family the good character I had seen in them that day, you could see their eyes light up and they would just beam with happiness!

When the kids got to be about Middle School age, the “YOU DID GREAT” hat became somewhat of an embarrassing reward. After all, no young teenager wants to look silly in a lame paper hat! At that point, I made our family a “YOU DID GREAT” plate. To be honest, I’m extremely limited when it comes to any type of artsy-craftsy talent. (That’s probably a HUGE understatement!) In an effort to really decorate my handmade plate, I put little squiggles all over it and thought to myself, “Wow! Look at that… I’m practically an artist!” Unfortunately, one of the little squiggles landed right after the word “you,” so I basically made a “YOUS DID GREAT” plate! That’s okay, though. I consider it a bonus… The kids get to mock me and I get to reward them! 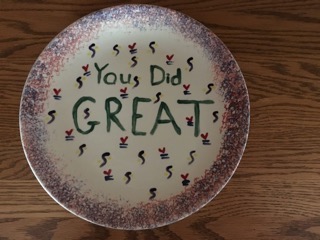 Several years ago, we began a new tradition with the “YOU DID GREAT” plate. Instead of just Steve and I recognizing and rewarding good behavior, we gave our children the opportunity to point out good character choices they observed in their sibling’s lives. After sharing what they had observed with me, they were then allowed to present the “YOU DID GREAT” plate to their deserving brother or sister.

When we began this new tradition, we thought it would be a sweet way to encourage positive relationships among the children. We were, however, surprised to find it had a much greater impact in our family. When the children were given the freedom to “catch” one another choosing good character, the level of tattling in our home decreased dramatically. Really, it’s opposite sides of the same coin. Our children will always watch one another. They’ll either watch to tattle on bad behavior, (exalting themselves) or they can watch to catch good choices (encouraging a sibling.) What a sweet change the new tradition brought about in our family!

What kind of good character should we be watching for in our children’s lives? Think about your day and the opportunities your children have to be others-oriented. When they choose to serve or bless a sibling, rather than simply looking out for themselves, we should reward that choice. In our home, riding in the front passenger seat of the van was a big deal. I swear I almost lost my mind trying to remember whose turn it was on a daily basis. When a child eagerly gave up their turn in the front seat, in order to bless another sibling who just seemed to need some extra “mom” time, we rewarded that behavior. With eight kids, sacrificing the extra muffin at breakfast, even when it was your “right” to have it, was a good character choice. Telling the truth when no one would know if you were lying, or stopping to pray with a crying sister, or playing a game with the toddler so that everyone else could concentrate on homework were all great reasons to receive the “YOU DID GREAT” plate.

Certainly, we should reward and acknowledge our children’s athletic, academic, musical, etc. achievements. We should celebrate with gusto! But let’s not forget to show that same enthusiasm for their character achievements. Rewarding those actions and encouraging our children to continue pressing on, in order to grow more like Christ, will strengthen them as they persist in making good choices and will bear great eternal fruit for their future!